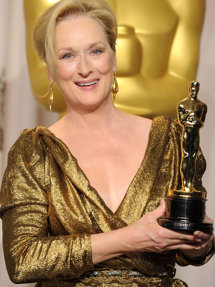 Winning an Oscar is an undeniable milestone is an actor’s career. For newer actors, it can open doors to amazing roles and for more seasoned professionals, winning can validate a long and challenging career.

It is widely believed that many of the award granting organizations, such as the Academy of Motion Picture Arts and Sciences, have  favorite actors and actresses that tend to win out over others. While this may be true about nominations, in fact, it is still quite rare to win multiple Oscars in acting categories.

In total, there have only been 39 actors and actresses with more than one Oscar win for acting. This list includes such megastars as; Marlon Brando, Robert Deniro, Tom Hanks, Dustin Hoffman, Elizabeth Taylor, and Jessica Lange. Even more illustrious than winning two Oscars, is the rare feat of winning 3 or more. This club holds only 6 members to date; Katharine Hepburn, Ingrid Bergman, Walter Brennan, Jack Nicholson, Meryl Streep, and Daniel Day-Lewis.

While it is always fun to root for the under dog, it is nice to see some of the world’s most talented actors and actresses consistently rewarded for all of their hard work.

This year, there are quite a few actors and actresses expected to be nominated, and possibly join the “Multiple Oscars Club”;

If Meryl Streep walks away with an Oscar in 2014, she will tie Katherine Hepburn for the most wins at 4. If Tome Hanks wins, he will join the small group of actors with 3 wins.

While we here at Double Gobble do not necessarily favor any actor over another simply because of previous wins, we are eager to see who will separate themselves in 2014 and join the list of the most talented actors and actresses in the world.